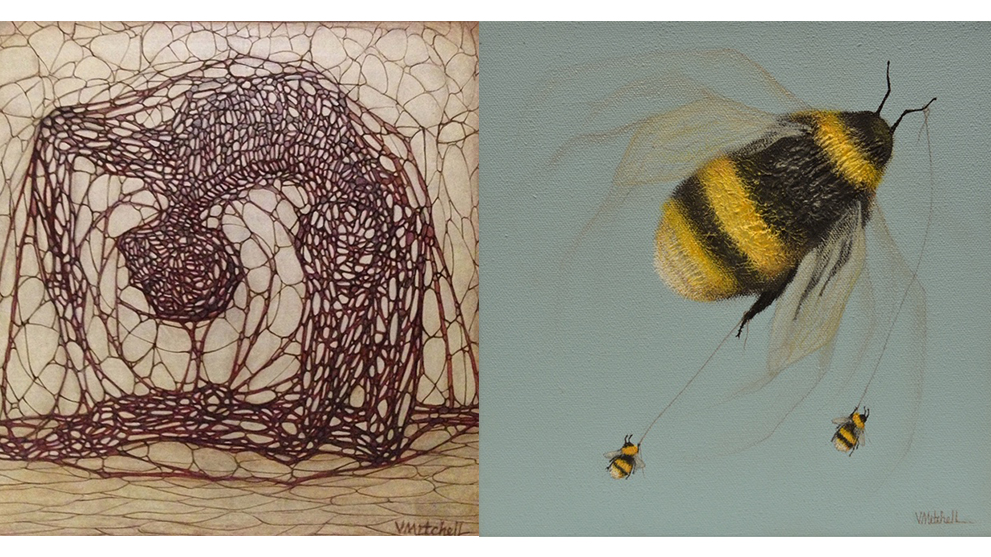 Victoria Mitchell has had a lifelong passion for translating her emotions and perspectives into mixed media paintings. Her interest in art began as a child with drawing and painting, and she received guidance and instruction from various teachers and artists who encouraged her to explore her talent.

At the age of 46 during a difficult life change she resigned from a 22-year career as a Registered Massage Therapist and yoga teacher. Choosing to give time to her creativity and return to her love for visual art was a significant step in her life, and she now once again gives life to her feelings through painting.

Environmental elements of the BC west coast and interior, along with extensive travelling, inspire her diverse paintings and abstract, representational explorations. Her mixed media works include still life, natural elements, realism and surrealism, anatomical and abstract forms. Studying the intricacies of the human body over many years has also influenced her communication of visceral interconnections. Mitchell hopes to encourage others who might be hesitating to express themselves through visual art to follow their creative passions and share them with others.

Victoria Mitchell is an abstract/representational mixed media artist. Raised in Vancouver, she took an early interest in art as a child and had a practice until her early 20s when she began working as Registered Massage Therapist. After 22 years in massage therapy, her passion for art was reignited. She created a home art studio and began showing her paintings again in 2017. She has won several awards, including the 1987 Emily Carr BC Young Artists award, with the piece exhibited at the Vancouver Art Gallery, and toured through BC and Seattle; the 1988 Art’s Fair first place two-dimensional award; 1988 Arts Umbrella Multi-Media Workshop Scholarship; and in 1989 a medical illustration award, with work displayed by the Medical Research Council of Canada.